Home > Socio-Political Issue > Yoga and Meditation: The Pursuit of Happiness

The term ‘YOGA’ is derived from a Sanskrit word named – ‘YUJ’ which means “to join” or the union with the higher power. It is essentially a spiritual discipline which works on the three dimensions of human existence that is: 1. BODY 2. MIND 3. SOUL. Let’s talk more about yoga and meditation and know the various dimensions why it is called the pursuit of happiness.

The importance of yoga can be found in the ancient text of RIGVEDA, where the knowledge of Vedic yoga was given. Yoga has proven to bring harmony between the human mind and body. The unification of the three dimensions is the essence of YOGA, and one who attains it is termed as a YOGI. The main aim of YOGA is the liberation from all kinds of hindrances and sufferings to attain liberation or MOKSHA.

The practice of YOGA started thousands of years ago, even before the arrival of the various religious strands. In YOGA history, it is LORD SHIVA or ADIYOGI who is considered to bring the knowledge of YOGA through pouring his knowledge of YOGA in SAPTARISHIS who travelled across the globe to spread this knowledge. Agastya Saptarishi was the one which led to the spread of YOGA CULTURE in INDIAN SUBCONTINENT. Later the practice of YOGA was done under the guidance of a GURU, and the GURU not only taught the subject of YOGA but also gave spiritual knowledge along with it.

“PATANJALI” is known as the FATHER of MODERN YOGA who codified all aspects of YOGA in YOGA SUTRAS. Later, It was SWAMI VIVEKANANDA who then lead to the extension of yoga and meditation across the globe in the 19th century. He wrote a book named RAJA YOGA and further wrote JNANA YOGA and KARMA YOGA which were the interpretations of Patanjali’s yoga sutras.

There are mainly 11 types of YOGA:

“HATHA” is a term used to describe all physical postures in yoga. It has various styles, and it is different from KRIYA, RAJ and KARMA yoga.

It was developed by BKS IYENGAR, which involves the practice of precise movements in yoga.

It is a combination of breath, postures and sounds. KUNDALINI means coiled energy which can be strengthened by focusing on seven chakras of the body.

This yoga technique is an advanced level yoga which is a combination of standing and floor postures.

It is a coordinated movement of breath and body, and it is more athletic.

Bikram Yoga is named after BIKRAM CHAUDHARY. It is a series of 26 basic postures. It focuses on the alignment of the body.

It is a series of postures done while sitting and are to be held for a longer time.

It is a relaxing yoga which can be performed to drive out the fatigue from the body. It helps to cleanse our body and mind.

It is specially designed for the moms to be, which strengthen pelvic muscles and abdomen.

It focuses on mind, body and heart. It is a combination of hatha yoga and vinyasa yoga.

It is fused with spiritual chants and body postures.

MEDITATION: The Pursuit of Happiness

It is a practise where an individual through mindfulness or focusing on a particular object leads to focused attention and clarity in mind along with it, there are emotional stability and mental peace. It is generally considered to be leading to self – realization and enlightenment.

Generally, after practising yoga postures with systematic rhythmic breath movements called SUDARSHAN KRIYA one sits in a still pose called MEDITATION. It can be guided and can be done in many ways like chanting mantras, following the music, various sounds and many more.

THERE ARE EXTRAORDINARY BENEFITS OF YOGA AND MEDITATION WHICH ARE MENTIONED BELOW:

The regular practice of yoga and meditation leads to the generation of oxytocin hormone in the body which develops a feeling of trust in others and is helpful in overall well being of the body. It also leads to a decrease in the dopamine levels in the body, which leads to calmness in the body of an individual. In the present scenario, this practice can be referred to as the “elixir of life” as it is a super fun activity, and it further leads to a sharpness and focused attention of an individual.

The regular practice of yoga and meditation leads to better breathing and generation of happy hormones in the body. It balances our blood pressure, and thus there is less stress on the lungs and the heart. The powerful technique of Sudarshan kriya has scientifically proven to drive-off deadly diseases. The balanced blood-pressure leads to a healthy mind and a healthy body.

It has been scientifically proven that regular practice of yoga asanas and meditation can lead to focused energy, which further leads to better results to the individuals from all walks of life. Several public figures recommend daily practise of yoga asanas and meditation such as JAY SHETTY (MOTIVATIONAL SPEAKER ), PM MODI, BILL GATES and the like.

Various types of yogas lead to the strengthening of various aspects of the body. Regular practise of yoga asanas has proven benefits of increased flexibility in the body and increasing the strength in the muscles.

Through powerful breathing techniques of Sudarshan kriya, one experiences improved respiration. Various yoga asanas lead to manage weight, and many individuals are now taking it on a competitive level, where they show off their various HATH YOGA practises. Also, yoga and meditation together lead to the generation of positive energy in the body.

Regular practice of yoga and meditation leads to an infusion of good hormones in the body. It provides calmness in the body and mind; it gives a positive outlook towards life and makes us sorted for the choices we want to make in our lives. Also, it gives mental clarity, relieves chronic stress, increases body awareness, centres attention and sharpens concentration.

With the regular rhythmic breathing and asanas along with meditation, one is able to sleep better. There is various mudra pranayama in yoga which strengthen the backbone, thus giving relief from back pain and also boosting our moods and making our lives happy and joyful.

It has been scientifically proven that yoga, pranayama and meditation if practised together can cure chronic diseases such as Asthma, Arthritis, also it flushes away the toxins of hangovers and refreshes the body.

The regular practice of yoga and also intake of sattvic food has resulted in better digestion. There are various yoga asanas in the yoga sutras of Patanjali which are specially designed for improving digestion.

The context is written on yoga and meditation and reasons why it is considered as the pursuit of happiness. 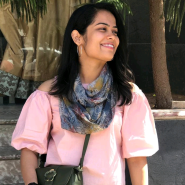 Aarti Yadav is an Artist, a political science intellectual and a regular practitioner and advisor of Yoga, meditation and Dance. She is the semi-finalist of India's Biggest entertainment show - INDIA'S GOT TALENT-8. Along with it, she is a key observer and writer on global politics, environment politics and Domestic politics. You can share your ideas with her @ aartiyadav314@gmail.com